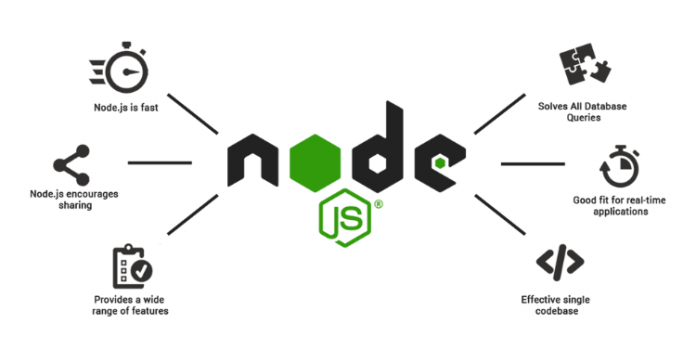 Node.js is an open-source JavaScript runtime environment and is popular among developers for its array of ready-to-go tools and features. A survey report by StackOverflow has shown that almost 49% of developers love to work with it. As a JavaScript environment, it holds immense potential and is vastly used for the development of scalable, resourceful and efficient web applications.

The USP of Node.js is its ability to work seamlessly with both front-end and back-end technologies. Before Node.js, developers found themselves juggling between the scripting of the two sides but that changed as soon as Node.js was introduced to the web world. But, it is also known for its potential to work with a large number of libraries, tools, IDEs and npms. So with its flexibility, versatility and impressive technology stack, it has ushered a new era of software development.

Today, there are plenty of advanced tools that are utilized by developers along with Node for perfecting their development process and making apps more functional, more productive and better-looking. Here, we look at the 9 best tools that find extensive use under Node.js web development services.

FeatherJS is an adept framework and is known for its minimalism. It works as a micro-service framework and enables developers to utilize the latest features of JavaScript. It is preferred by developers for its ease of interaction with almost all robust backend technologies and for its support of more than a dozen databases.

FeatherJS has hooks which act like small functions and can perform one task at a time. But by merging different hooks, it becomes relatively easier to develop complex web applications. Since the hooks can be executed on both the server-side and client-side, working with Feathers over web browsers and web servers is hassle-free and hence, it works smoothly with NodeJS and simplifies the entire development process.

Derby.JS is a full-stack, MVC framework which is loved by developers for its easy and quick rendering of services via native DOM methods, automatic conflict resolution, a powerful and steady data synchronization engine and organization of codes into components. Its synchronization engine called Racer can automatically sync data among servers, databases and browsers.

Derby is known for its simplicity and effectiveness in writing collaborative applications that load quickly, are highly interactive and support offline usage. Other notable features of Derby include client-side routing and module structure consisting of several Node.js modules.

Express.JS – for the development of scalable web apps

Express is another powerful, back-end framework for Node.js and is often referred to as Node’s de facto standard server framework. It is popular for its flexibility, efficient routing, middleware and debugging. Since it supplies users with numerous HTTP utility methods, creating APIs with Express is easy and fast. It also has templating engines that can be used for crafting dynamic content through the creation of HTML templates.

Express is highly customizable, is easy to link with databases like MongoDB and is effective in request handling. Because of its extensive set of features, it serves as an ideal Node.js framework for the creation of single-page applications, progressive web apps and hybrid web apps. Express is used by some big names like Uber, eBay and Netflix.

PM2 – for keeping the production environment in shape

PM2 is an advanced process manager for Node.js that comes with a complete set of top notch features to keep the production environment up and running. This open-source process manager comes packed with some pretty powerful features like declarative configuration, automatic load balancing, monitoring of key-metrics, a modular system and log management.

PM2 ensures that your web apps are up and running and can reload them without downtime. This frees the developers from the constant problem of restarting their apps after they have crashed. In fact, with PM2, apps can be easily started, reloaded, stopped and listed in the background. PM2 is used by PayPal and Intuit.

Socket.io – for bidirectional communication between clients and servers

Socket.io is a performant JavaScript library and is known to be scalable, reliable and functional. It offers a low-latency communication between the servers and the clients and is recognized for its top notch features like an automatic reconnection, packet buffering, debugging tools and testing libraries including mocha and tape.

Besides its standard features, it also offers advanced features that include namespaces, performance tuning, admin UI, load testing and the ability to be used with PM2. By using Socket.io, developers can also implement document collaboration, instant messaging, and real-time analytics. Microsoft Office and Zendesk are the prominent names that use Socket.io.

If you’re looking for customizable content APIs, then Strapi is your Node.js tool to go for. Strapi is a Node.js based headless CMS which is widely used for seamless creation of content structures, for integration with the best-in-class services from the third-party applications and for app deployment on users’ choice of platforms (self-hosted or cloud platforms).

With Strapi, developers need not worry about typical CMS complexities. They can easily connect to their preferred front-end framework, and their choice of database and get going with app building. Strapi makes writing, managing and editing of content precise and effortless.

When developers think about the security of applications, they think of Snyk. It’s a developer’s go-to security platform that is used for securing containers, codes and dependencies. Initially, it was used for fixing vulnerabilities of Node.js projects but over time, it has evolved to work with multiple platforms and frameworks including Python and Java.

Besides testing Node.js projects for vulnerabilities, it can also be used to test npm packages. Snyk offers a wide range of integrations that are used for monitoring dependencies and fixing definite problems. Developers can also use it for the prevention of security risks through PR checks.

Loopback.js – for building microservices and APIs

Loopback is an open-source, award-winning Node.js framework which is popular among developers for its extensibility, connectivity and functional components. It is used for crafting dynamic and productive REST APIs with less coding. This makes data accessible from some key relational databases like MySQL and MongoDB. It also enables the creation of a nested structure through nested queries.

With Loopback, developers are empowered with specific tools to build APIs and work efficiently with the TypeScript platform (courtesy of its first class TypeScript support). Developers will find it easy to review the changes to API endpoints while maintaining consistency through the validation of endpoints.

Koa – for hassle-free extension of apps

Koa is relatively new in the world of Node.js development tools, but effective nonetheless. It is expressive, robust and offers leverage through its range of useful features including cascading and lots of middleware functions. It is recognized for its simple API and minimal interface which proves advantageous in building flexible and lightweight applications.

Koa possesses a small footprint and provides various modules through npm. These modules can be directly plugged into the framework and can be easily extended. A striking advantage of Koa is that it is built on ES6, a bleeding-edge technology and hence, using it gives developers a competitive edge.

All the Node.js tools described here come with their own set of strengths. The choice of tools, however, depends largely on the type of Node.js development services. For instance, if your app requires better security, then you would pick Snyk in a heartbeat, but if you are looking for CMS solutions, then Strapi is your choice of framework.

So now that you have the list, pick the suitable one and get started on perfection. Happy Coding!!