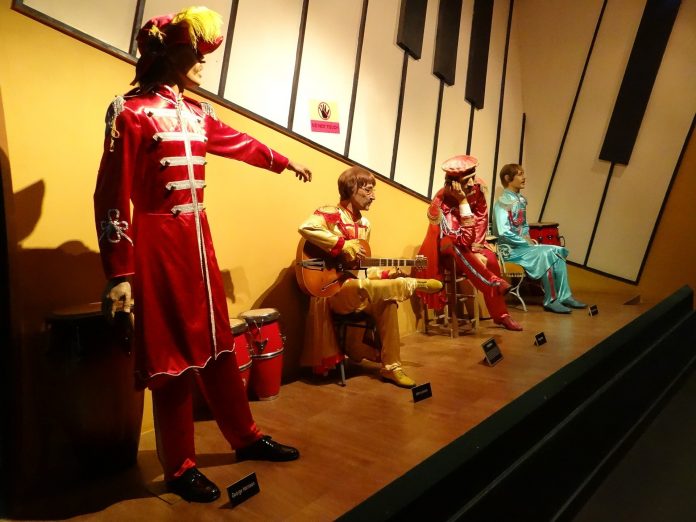 Few bands are talked about in higher praise than The Beatles. It seems that there comes a time in every creatives life where they sit down to take a deep dive into their overwhelmingly influential discography. If you’ve reached that moment, my friend, you’re in for a sonic treat like no other. McCartney and Lennon’s melodies, Ringo’s steadfast drumming, and Harrison’s weeping guitar are responsible for some of the most beautiful songs ever put to wax.

The main catalog of The Beatles features 188 original recorded songs, spread across 12-core studio albums, from 1963 to 1970. It’s a generous output for such a short time span, so opening the lid can be a little daunting. Here’s a timeline and brief description of their musical endeavors to help make the listening process as rewarding and digestible as possible.

When the Beatles were recently taken under the wing of manager Brian Epstein, he knew they had to scrub up to appeal to the masses. So, the band learned how to tie a tie and become the most famous rock band in the world.

This era consists of simple, 3 or 4 chord songs with irresistibly catchy melodies and a whimsical sense of innocence. There’s not much lyrical substance to be found, “I wanna hold your hand”, “she loves you, yeah yeah yeah”, but the hooks, energy, and charm are undeniable. Their debut album was recorded in a sharp 13 hours, but it changed the face of popular music forever.

A highlight from this era comes from the fab fours’ live performance at the Royal Variety hall, in the presence of the Queen. Before performing Twist & Shout, Lennon cheekily quipped: “For the people in the cheaper seats clap your hands. And the rest of you, just rattle your jewelry”. Fangirls and Beatlemania were in full swing…

Inspired by the lyrical complexity and intrigue of Bob Dylan, The Beatles began smoking pot and writing tunes that weren’t only catchy, but told personal stories with heft. Instrumentation choices also became more inspired and complex, with Harrison finding an ear for the psychedelic Eastern tones, and the band experimenting with idiosyncratic orchestral arrangements. In this era we got some of The Beatles’ most critically acclaimed tracks ever – A Day In The Life, Norwegian Wood, Eleanor Rigby, Strawberry Fields Forever.

Their work in the studio was also revolutionary, speeding up and slowing down tapes, playing instruments in reverse, and other unexpected moments of genius we take for granted today.

Before their inevitable breakup, The Beatles quit touring to really zone in on their studio work and songcraft. By this time, egos were clashing, and the band barely recorded in the same room. Lennon’s girlfriend, Yoko Ono, was frequently attending the studio sessions, and this frustrated the band members to no end.

With all the bubbling conflict and fights for control (McCartney was pretty dominant), the Beatles started writing songs on their own, with the only finest from each member making it onto the records. We were gifted with Something from Harrison, Let It Be from McCartney, and Come Together from Lennon. The band was no longer friends (at least during this period), but man was the music incredible.