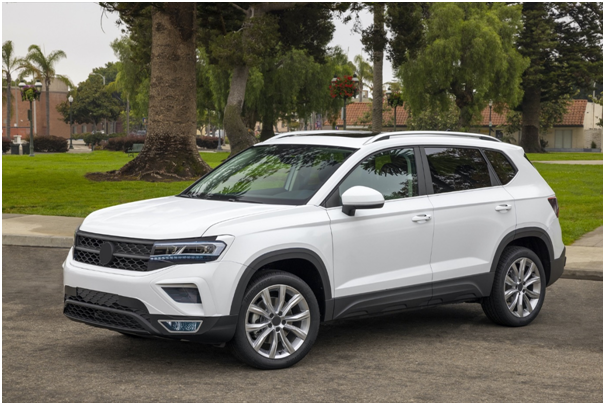 When Volkswagen started to prepare a full lineup of gas-powered crossover SUVs, the market accepted is whole-hearted attempts with open arms. In other words it took no time for Volkswagen crossover SUVs to secure a place in the first row of models of this body style, first in terms of popularity and then in terms of sales records.

The year 2022 which is around the corner has encouraged all the leading auto manufacturers to brush up their existing models, and bring something new to cater the new buyers. That’s where the name of Volkswagen comes in, since it has a new name Taos to present in its upcoming lineup of crossover SUVs. The Taos from Volkswagen has joined the lineup for the 2022 model year along with yet another model ID4 EV, which is ready to hit the showroom floors this season. Hence this German brand now has a perfectly rounded lineup of crossover SUVs that starts at the base with the most affordable subcompact crossover Taos and tops with a three-row midsize crossover Atlas. Moreover, Volkswagen did not forget its all-time hit Tiguan to count in its 2022 model year lineup of crossover SUVs. So, what do the buyers finally get from these newly released Volkswagen crossover SUV models? The Porterville Volkswagen dealer gave us the answer in detail.

The Taos is an all-new crossover model released by Volkswagen for the year 2022. It has joined the upcoming lineup as the smallest crossover model from the brand. Motivated enough by a 1.5-liter turbocharged four-cylinder engine, the 2022 Volkswagen Taos moves with a reasonably good 158 hp and 184 lo-fi of torque, after the engine pairs with an eight-speed automatic transmission that sends the engine power to the front wheels. The 2022 Volkswagen Taos models can also be configured with the available all-wheel drive model where they will get a seven-speed dual-clutch automatic gearbox to pair the engine.

The Volkswagen Tiguan has received a big update for the 2022 model year model celebrating the release of its second-generation models. This time Volkswagen has sharpened up the exterior styling of its flagship crossover model, making the Tiguan look even more rugged as well as muscular. On the other side, Volkswagen has even tweaked the interior to give the users amore upscale feel. The changes include a revised design of the steering wheel and a standard digital gauge cluster with updated controls. There is also a newNoisettethat wraps the cabin in a new chocolate brown color choice. The 2022 Volkswagen Tiguan is now an even safer crossover to drive, since the automaker has installed its IQ. Drive driver assistance package as an available feature throughout the stretch of the 2022 model year lineup.

As per the Porterville VW dealer, the 2022 Volkswagen Atlas Cross Sport is a trim in the Atlas series that has now took the market of crossovers by storm. It is now sporting a new rakish profile that helped it look all the more sharp, in the eyes of the onlookers who knew how its predecessors looked like. On the other hand its SE base model trim now received an 8.0-inch digital instrument cluster and are equipped with a new V-6 engine that behave in a more polished way, with the help of the new Technology package that has a new standard trailer hitch to offer.

Why Backup Cameras are a Must-Have for Every Car?

Why You Should Never Drive Without a Spare Tire Cover?

Automatic vs. Manual Cars – Which One Is the Right Fit For You?