A new rumor suggests that Apple might be releasing a new 15-inch MacBook with an option for an M2 or M2 Pro processor. Apple’s recently launched 13-inch MacBook Air and MacBook Pro will be the first to use the second-gen M2 chip, but if you believe these latest rumors, the expanded M2 Pro may be coming soon.

The info comes from a tweet from well-known Apple analyst Ming-Chi Kuo, who suggests that a new 15-inch MacBook laptop will arrive as early as the second quarter of 2023. This is much sooner than the fourth quarter arrival previously expected, which would have lined up with the timeline of how the M1 and M1 Pro rolled out. 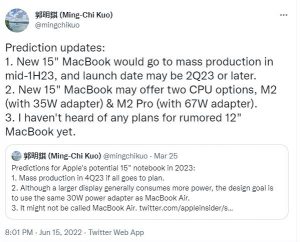 Kuo notes that this new 15-inch laptop might not be a MacBook Air, as was previously reported by others. Apple once sold a MacBook that lacked the Air or Pro designation, so it wouldn’t be a first for a new MacBook to appear. Earlier rumors suggested a 12-inch MacBook might be planned, but Kuo stated there hadn’t been any discussion of that product — so perhaps Apple is now favoring these larger screen sizes. Bigger displays seem to be the most popular, and from smartphones to TV screens, we all want to have a bigger window for browsing the internet and apps.

Either way, this would be the first MacBook to offer the “Pro” chip as an upgrade to the standard one. In previous models, the M1 Pro and M1 Max configurations were not offered as options alongside a product that was also sold with a standard M1.

Besides an overall speed improvement, Apple’s new M2 processor saw a big gain in graphics processing speed, and an M2 Pro would likely double these performance boosts, making it quite a potent laptop. Currently, the M1 Pro variant is only available in the MacBook Pro, which suggests this M2 Pro-powered 15-inch laptop might end up being called a “MacBook Pro,” but that remains an open question.

The 15-inch and 17-inch MacBook Pro laptops were the standards for many years. While the 17-inch model was last made in 2012, a MacBook Pro with a 15-inch size was updated through 2019. Now it looks like Apple might bring back at least one of these popular laptop sizes with a new and faster MacBook in early 2023 with a choice of processors.

All You Need To Know About AI-Based Optical Character Recognition

Data Fabric, the Transformative Next Step in Data Management

Education Shahbaz - June 30, 2022 0
It’s no secret that the job market is tough these days. With so many people competing for a limited number of jobs, it can...

Social Media Shahbaz - June 29, 2022 0
Your business was born recently, and you had just the time to publish a few posts between one social network and another. You may...